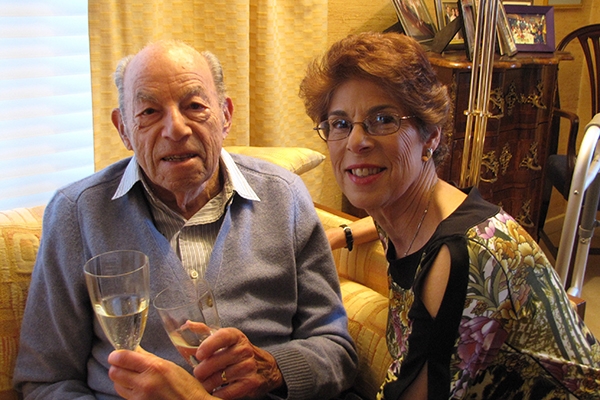 "Despite his unsettled early years, or maybe because of them, I knew him as an eternal optimist and a man who always looked for the common ground among individuals and was ever interested in their lives. As one of my brothers observed when he accompanied him to the VA, he wasn’t wheeled from provider to provider, rather from family to family.

I love you, Dad, and miss you very much, but thanks for everything you’ve taught me and given me."

Jean Warner Baer (Feb. 3, 1925 - Mar. 3, 2018) was born in Berlin, Germany. As a member of a Jewish family, Baer witnessed the rise of the Nazis and the Third Reich, which led him and his family on various journeys to escape the hatred, persecution and the prospect of death.

On June 29, 1941, at age 16, he and his grandmother sailed on the SS Excambion from Lisbon, following a circuitous few years in Paris, Bordeaux, through the Pyrenees and finally to Portugal.  Arriving in the United States, Baer reunited with his mother and stepfather.

After completing high school in New York City, Baer enlisted into the U.S. Army on April 29, 1943, as a member of the 28th Infantry Division. He was an interpreter as he was fluent in German, French and, by then, English. Following training at Fort Benning, Georgia, he was naturalized as a U.S. citizen on Oct. 1, 1943. On Dec. 29, 1943, he shipped out to the European theater, assigned to Normandy, France and Germany.

Baer earned three Purple Hearts and took part in the invasion of Normandy, and his unit was among the various ones that participated in the liberation of Paris on Aug. 25, 1944. He received an honorable discharge on June 14, 1945.

He was proud of his faith, heritage and service to the United States, and in his later years, he was fortunate to receive excellent care from the medical teams at the Veterans Administration on Long Island, New York.