Each year, one marching band—most often a military band but frequently a university band of distinction—is chosen to represent the U.S. at the D-Day commemoration in Normandy, France.

In June 2018, the UNC Charlotte "Pride of Niner Nation" Marching Band—as it entered just its fourth year of operation—had that honor.

Nearly 140 student members of the band had the opportunity of a lifetime to connect with UNC Charlotte's roots as an educational center for returning WWII veterans as they honored the U.S. military service members whose heroic actions changed the course of world history. The trip was funded, in part, by a major gift from the UNC Charlotte Alumni Association.

Share the experience with the band as the University presents a special webcast program from France on D-Day.

While in Normandy, the band also marched in a parade in Sainte-Mère-Église, one of the first villages liberated by American troops, and performed at the Normandy American Cemetery. Watch for additional video coverage of the Pride of Niner Nation’s extraordinary overseas experience as they represented UNC Charlotte and the United States of America at these historic events.

Providing UNC Charlotte students educational opportunities such as this is a priority of EXPONENTIAL: The Campaign for UNC Charlotte. Learn more about supporting the campaign at Exponential.uncc.edu.

The City of Lights became the City of Love for two Niners in the UNC Charlotte "Pride of Niner Nation" Marching Band. The band’s amazing tour representing America in D-Day commemorations moved to Paris, where rising seniors Nick Francis and Lydia Robinson, from Denver, NC, made a life-changing visit to the Eiffel Tower.

The PNNMB capped off its trip to France with a final performance in Paris, where the band cut loose at the Jardin d'Acclimatation, to the delight of the local audience.

Origins of Opportunity: The Pride of Niner Nation in Normandy - Promo

Enjoy coverage of the band’s performances and the exciting reactions and perspectives of our students as they experienced the sights and sounds of the historic Normandy coast. The program also features the expertise of one of the University’s historian-experts on World War II, and the thoughts of Holocaust survivor and Professor Emerita Susan Cernyak-Spatz. 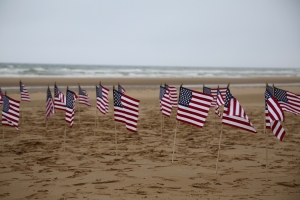 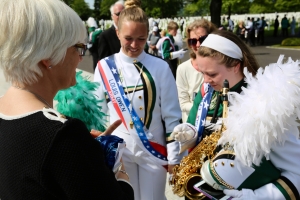 The granddaughter of General George Patton


Helen Patton, granddaughter of General George Patton, poses with members of the Pride of Niner Nations Marching Band shortly after the band’s performance at the Brittany American Cemetery in Normandy, France. 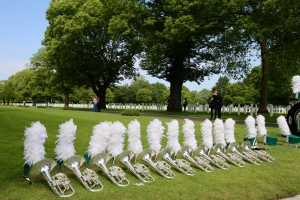 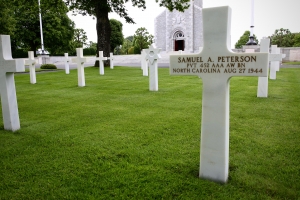 
One of the visits on the Pride of Niner Nation Marching Band’s tour of Normandy to commemorate D-Day is the Brittany American Cemetery, the resting place of 4,410 American servicemen. Cemetery Superintendent David Bedford on Thursday showed the grave of Pvt. Samuel Peterson of Charlotte, killed in the Normandy campaign.  As he rubbed Omaha Beach sand into the stone to set off...